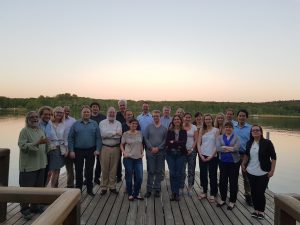 AwE contributes a talk and a poster at
"Undoing Aging 2018" in March in Berlin, Germany.

AwE presents a poster at "Pushing the Limits of Healthspan and Longevity" in April 2018 in Hanover, Germany.

Publication: Mitochondrial Quality Control via the PGC1α-TFEB Signaling Pathway Is Compromised by Parkin Q311X Mutation But Independently Restored by Rapamycin The Journal of Neuroscience, September 16, 2015.

Publication: Genetics and Pharmacology of Longevity: The Road to Therapeutics for Healthy Aging Advances in Genetics, 2015

AwE presented at the online “Aging Summit” in February 2018,
on “Healthspan, Lifespan and Well-being: Definitions and Pathways”.

Conference of the Calorie Restriction Society International
May 18-21, 2016
University of Arizona, AZ, USA

The sole responsibility for the content of this webpage lies with the authors. It does not necessarily reflect the opinion of the European Union. Neither the EASME nor the European Commission are responsible for any use that may be made of the information contained therein.